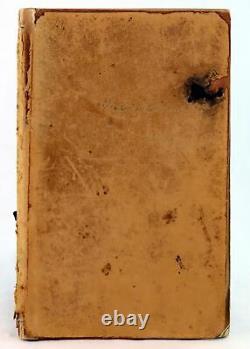 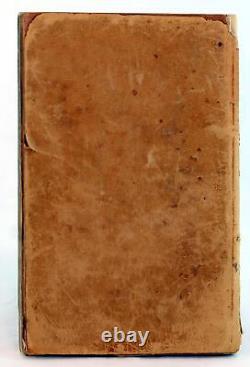 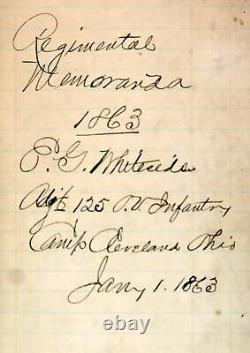 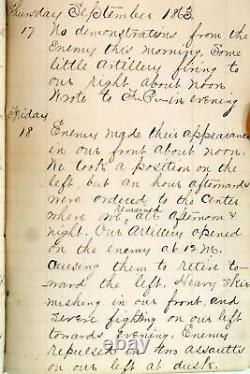 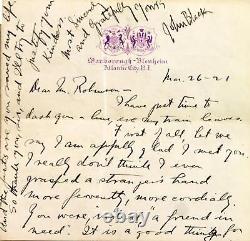 Covers Jan 1st -Sept 18th 1863. Laid in letter from one John Black to a Mr Robinson dated 3-26-21 on Marlborough Blenheim Hotel Atlantic City, NJ stationary discussing how the previous owner of this diary saved his life and apparently does not attend many GAR conventions. Boards has heavy shelf-wear present to the extremities (boards are chipped and worn, spine is split and heavily chipped at the spine ends).

Text is clean and free of marks. Covers the relevant actions of the regiment in the Chattanooga Campaign up to the battle of Chickamauga. In the American Civil War, Ohio provided the federal government with 260 regiments of men, including infantry, artillery, and cavalry units. Ohioans also served in several other regiments from other states, most notably from Kentucky, West Virginia, and Massachusetts, as well as in federal units. Infantry regiments formed in Ohio became known as regiments of Ohio Volunteer Infantry. They served for varying lengths of time, averaging one hundred days to three years. On October 6, 1862, eight companies of the 125th Regiment Ohio Volunteer Infantry mustered into service at Camp Taylor, at Cleveland, Ohio. The men in the regiment were to serve three years. The 125th remained at Camp Taylor drilling until January 3, 1863, when the regiment traveled via train to Cincinnati, Ohio. Upon reaching Cincinnati, the organization boarded river transports and sailed to Louisville, Kentucky, arriving at this location on January 8, 1863. On January 28, 1863, the regiment sailed on river transports from Louisville for Nashville, Tennessee, reaching the second location on February 7, 1863. The 125th immediately joined a Union movement to remove Confederate soldiers from Franklin, Tennessee. The regiment assumed a position in the front of the Union advance and was one of the first units to enter the city, driving the Confederates before them. The Southerners unsuccessfully tried to retake the city on March 9, 1863 and again attacked the Union forces on April 10, 1863 at the Battle of Harpeth River.

In this engagement, the Union soldiers drove the Confederates from the battlefield and pursued the retreating Southerners to Columbia, Tennessee. On June 21, 1863, the 125th departed Franklin for Murfreesboro, Tennessee. Three days later, the regiment began a march to Hillsboro, Tennessee, reaching this location on July 3, 1863. On August 6, 1863, the organization moved towards Chattanooga, Tennessee, arriving at the Sequatchie Valley thirteen days later. The regiment stayed at this encampment until September 1, 1863, when the unit continued on the march to Chattanooga, arriving at this city on September 4, 1863.

On the next day, the 125th skirmished with Confederate forces at Lookout Mountain at Chattanooga, with the Southerners evacuating the city by September 9, 1863. The regiment advanced into northern Georgia on September 10, 1863, marching via Ringgold, Rossville, and Lee & Gordon's Mills to Chickamauga, Georgia, reaching the final destination by September 18, 1863. 1863 Hand Written Regimental Diary 125th Ohio Volunteers Chattanooga Campaign. Up For Sale Today is. Hand Written Regimental Diary 125th Ohio Volunteers for 1863.

Written by the Acting Adjutant-General: Captain E. OUR MISSION STATEMENT: Our goal is to provide the best books for the lowest prices. Thank you for visiting this listing and we hope to see you again soon!

Book formats and corresponding sizes. Approximate cover size (width × height). ALL ITEMS ARE DESCRIBED TO THE BEST OF MY ABILITY! We do not mark merchandise values below value or mark items as "gifts" as US and International government regulations prohibit such behavior. (This is a felony in the United States).

This item is in the category "Books & Magazines\Antiquarian & Collectible". The seller is "lastexitbooks" and is located in this country: US. This item can be shipped worldwide. Whitesides