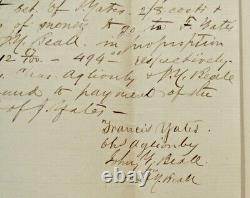 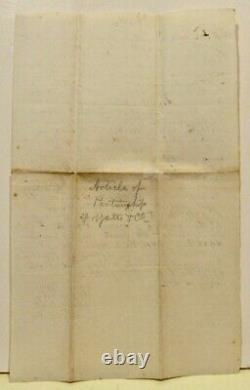 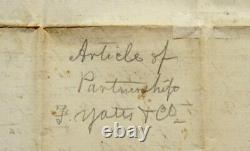 " Tall quarto (12.5" x 7.75), single sheet, approximately 221 words recorded in ink on laid paper, signed by Francis Yates, Charles Aglionby, & John Yates Beall apparently for sister Janet M. Docketed in pencil on the verso. Text transcribed in full below. He failed & gave deed of trust on the Halltown Mill property to secure them. Yates, dec'd and for? However he is only bound to pay Ch.

The authenticity of the signatures are unconditionally guaranteed. A fascinating document presenting a complicated agreement relative to the estate of John Yates. Although all the signers, as well as John Yates, were men of distinction, John Yates Beall is of particular note.

John Yates Beall (1835 - 1865) was a Confederate navy officer hanged as a spy by Union authorities at the end of the American Civil War. A militiaman who witnessed the execution of John Brown in 1859, Beall joined the Stonewall Brigade, fought with Turner Ashby, and participated in the Shenandoah Valley Campaign (1862), during which he became separated from his unit. He moved to Iowa and then to Canada, where he eventually joined the Confederate navy and planned and sometimes executed various clandestine missions. After being captured again at Niagara Falls, this time when he attempted to derail trains carrying Confederate prisoners, Beall was tried for spying.