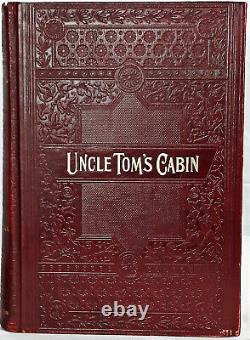 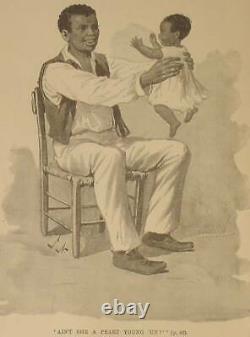 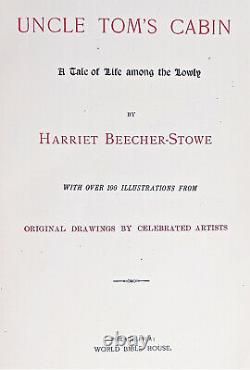 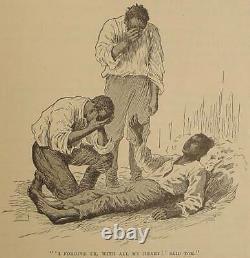 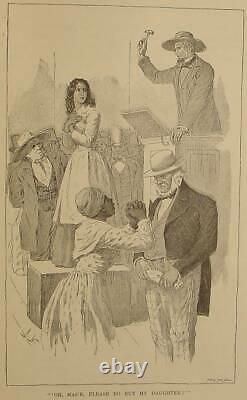 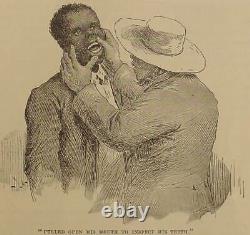 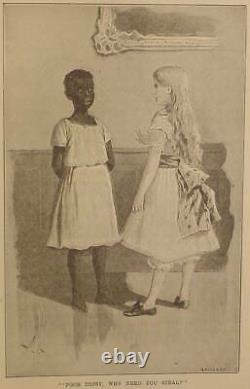 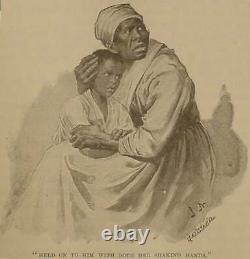 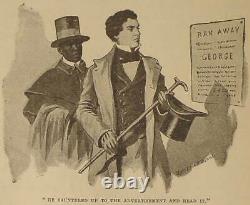 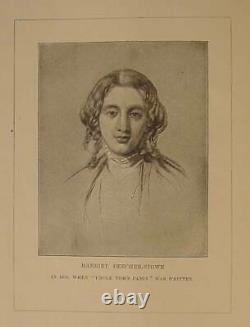 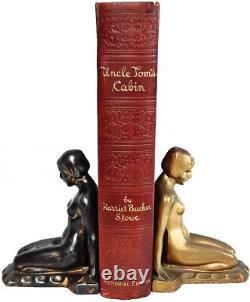 T his sale is for an original 1897 FIRST EDITION , THUS of " UNCLE TOM'S CABIN ". As published into a special memorial edition just after Stowe's passing on July 1, 1896. YOU'LL LOVE THIS BOOK!! I t is dominated by a single theme: the evil and immorality of slavery. Stowe emphasizes the horrors of slavery on almost every page of the novel while also asserting that Christian love can overcome something as destructive as the enslavement of fellow human beings.

1 & 2 combined into one book. I t is beautifully illustrated with over 100 ILLUSTRATIONS!!!

By celebrated artist of the time. U pon publication, Uncle Tom's Cabin ignited a firestorm of protest from defenders of slavery (who created a number of books in response to the novel) while the book elicited praise from abolitionists. The novel had a profound effect on attitudes toward African Americans and slavery in the United States, so much so in the latter case that the novel intensified the sectional conflict leading to the American Civil War. The book also helped create a number of stereotypes about Blacks, many of which endure to this day.

These include the affectionate, dark-skinned mammy; the Pickaninny stereotype of black children; and the Uncle Tom, or dutiful, long-suffering servant faithful to his white master or mistress. In recent years, the negative associations with Uncle Tom's Cabin have, to an extent, overshadowed the historical impact of the book as a vital antislavery tool. In a few years over 1.5 million copies of the book were in circulation in England, although most of these were pirated copies.

P ublished in 1897, it is in VERY GOOD+ CONDITION! For any age and especially to be 125 YEARS OLD!!! And tightly bound with NO TEARS!!! The inside text and illustrations are very neat and clean. Even the interior hinges are in very good condition!

GET IT WHILE YOU CAN!! Harriet Beecher Stowe was raised in the Puritan tradition. Her father, Lyman Beecher was a minister. The Beecher's moved to Cincinnati when her father was appointed president of Lane Theological Seminary. Cincinnati was just across the river from the slave trade. Her family shared her abolitionist sentiment and was active in hiding runaway slaves. Harriet set out writing a controversial novel illustrating the moral responsibility of the entire nation for the cruel system of slavery. She presented the first episodes to the editor of the Washington anti-slavery weekly, The National Era, which published in forty installments.

Despite The National Era's small circulation, the installments reached a large audience because the weekly episodes were read to families and gatherings throughout the land. The episodes attracted the attention of Boston publisher, J. First published in March of 1852, "Uncle Tom's Cabin" immediately broke all sales records of the day.

The issue of slavery had divided sentiments well before 1852. However, it took a sentimental human novel to catapult it to the national spotlight. Upon meeting Stowe at a White House reception, Abraham Lincoln was said to have exclaimed, So this is the little lady who started this big war. Please see our other books too! This item is in the category "Books & Magazines\Antiquarian & Collectible".