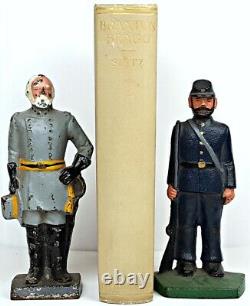 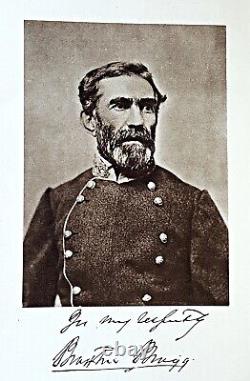 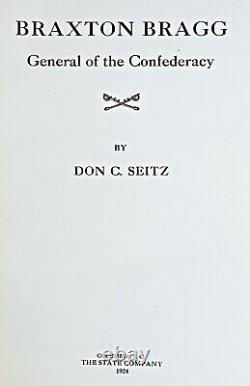 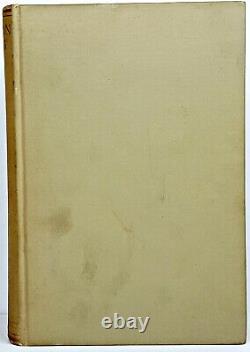 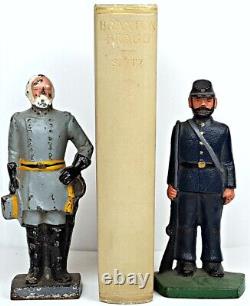 T his sale is for an original 1924 FIRST EDITION of " BRAXTON BRAGG: GENERAL OF THE CONFEDERACY " written by Don C. YOU'LL LOVE THIS BOOK!! Braxton Bragg was a controversial figure during the Civil War, having few, however high-ranking, supporters (Jefferson Davis), and many who disapproved of his leadership approach and tactical choices. This book is an excellent biography of this contentious General, providing a detailed account of his wartime service. It includes copious passages quoted from letters exchanged with Bragg, as well as other documentation.

While many writings paint an unflattering picture of Bragg, this particular work observes the General favorably. Although his demeanor may have been unpleasant, he played an integral role during the Civil War. Bragg's military experience is marked by highs and lows.

He was so controversial in large part because most found him to be volatile, argumentative, coarse, and unable to take advice. He developed a reputation for accepting nothing less than total discipline from those under his command. Some believed that his methods were excessive, resulting in two attempts on his life by his own men. His supporters suggested that his unyielding nature and severe attitude were a result of his subordinates' incompetence. Bragg, who had resigned once already from the Army in 1856 (likely due to his unpopularity), had been serving in the Louisiana state militia when he was appointed brigadier colonel in the Confederate Army in 1861.

He rose through the ranks quickly and was ultimately promoted to full general after the Battle of Shiloh in 1862 - only seven men were to hold this rank in the Confederate Army. Bragg faced opposition after the Battles of Perryville and Stones River, where both times he chose to withdraw his men rather than push for victory. He found that even his supporters began to question his tactical decisions. However, Bragg later achieved the most significant Confederate victory in the Western Theater at the Battle of Chickamauga, which, for a time, restored his supporters' faith in him.

When he was defeated by General Ulysses S. Grant at Chattanooga, he was replaced, but went on to serve as an advisor to Confederate President Jefferson Davis in the final months of the War.

Fort Bragg was built in 1918 in North Carolina and is named after Braxton Bragg. P ublished in 1924, this book is in VERY GOOD CONDITION!!!

Please see our other books too! This item is in the category "Books & Magazines\Antiquarian & Collectible". The seller is "rebel_soldier" and is located in this country: US. This item can be shipped worldwide.