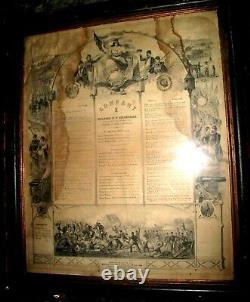 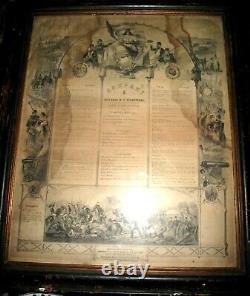 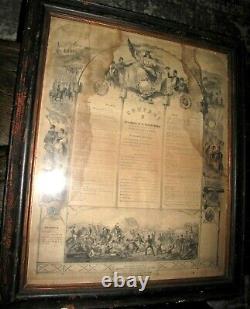 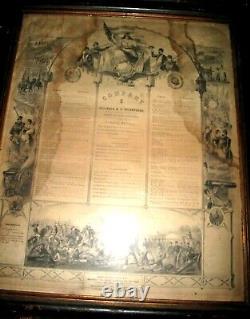 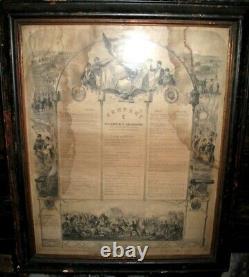 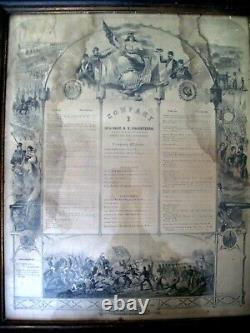 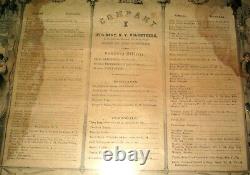 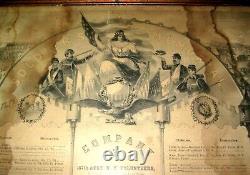 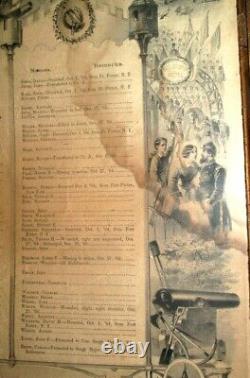 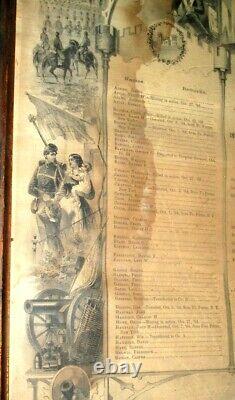 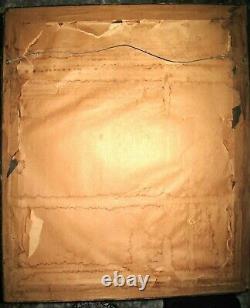 THE SOLDIER'S MEMORIAL: 187TH N. Richmond, VA: J C Fuller & Co, 1864. Litho'd by Major and Knapp, NY. Primarily mustered from Dunkirk, Albion and Buffalo, NY, this large framed period Civil War litho contains the names of all men who served in the 187th, co I of the NY Volunteers. It is decorated in Union scenes throughout the borders, head and foot, as shown. Sytained a bit, but certainly with character, and in a period frame. Frame measures 25.5" x 21.5" x 1. Rare and great for any collector! Mustered in: October 8-13, 1864. Mustered out: July 1, 1865.

The following is taken from. New York in the War of the Rebellion. Berens received authority to recruit this regiment, with headquarters at Buffalo; it was organized at Buffalo; only nine companies were recruited, and Companies A, C, D, E, G and I were mustered in the service of the United States for one year October 8 and 13, 1864; Company B joined the regiment February 14, 1865; F in May, 1865; H November 24, 1864.

The 65th Regiment of the National Guard of the State formed the nucleus and furnished a large number of men to the regiment. The companies were recruited principally: A at Buffalo, Tonawanda, Ashford, Great Valley, Franklinville, East Hamburg and Dunkirk; C at Ellicottsville, Ashford, Lancaster and Hinsdale; D at Great Valley, Alden, Ellicottsville, Groveland and Lockport; E at Great Valley, Hanover, Hillsdale, Alexander and Harmony; G at Bennington, Sheldon, Lockport, Ellicottsville, Java, Wilson, Royalton and Syracuse; H at Buffalo, Mansfield, Groveland, Royalton, Elmira, Pomfret and Great Valley; I at Dunkirk and New Albion; B and F in the same localities as the other companies. The regiment, then six companies only, Lieut.

Daniel Myers, left the State October 17, 1864; it served in the 2d Brigade, 1st Division, 5th Corps, and, under Colonel Myers, was mustered out and honorably discharged July 1, 1865, near Washington, D. During its service the regiment lost by death, killed in action, 8 enlisted men; of wounds received in action, 7 enlisted men; of disease and other causes, 32 enlisted men; total, 47.

This item is in the category "Books & Magazines\Antiquarian & Collectible". The seller is "mantosilver" and is located in this country: US. This item can be shipped worldwide.