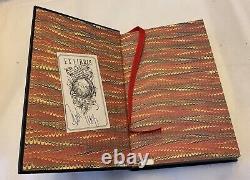 Set of 21 Time-Life Collector's Library of the Civil War. Condition: Lot of 21 leather-bound hardcovers in good to very good condition. Almost all of them have the former owner's signed bookplate on the front pastedown or front flyleaf. Some have bumped corners, lightly scuffed or scratched gilding on outer page edges, and a few have some wear or small white spots on edges. One book (Personal Recollections of a Cavalry Man) has damage to the front pastedown and front flyleaf (see picture).

Pages are clean & unmarked. Lettering on spines and covers have minimal fading/wear with the exception of two books (Mosby's Rangers & Army Memoirs) which have some fading of small areas of text on their spines. The following books are included. Army Life in a Black Regiment by Thomas Wentworth Higginson. Army Memoirs by Lucius W.

Battle-Fields of the South by an English Combatant. Campaigning with Grant by Horace Porter. Campaigns of a Non-Combatant by George Alfred Townsend. The Citizen-Soldier by John Beatty. Daring and Suffering by William Pittenger.

Detailed Minutiae of Soldier Life by Carlton McCarthy. Four Years in Rebel Capitals by Thomas Cooper DeLeon. In and out of Rebel Prisons by Alonzo Cooper. Life in the Confederate Army by William Watson. Mosby's Rangers by James Joseph Williamson.

Personal Recollections of a Cavalryman by James Harvey Kidd (has peeled areas in lower portions of front flyleaf and pastedown - see picture). A Rebel War Clerk's Diary Vol II by John B. Recollections of a Private by Warren Lee Goss. Reminiscences of the Civil War by John B Gordon.

Richmond During the War by Sallie B. A Soldier's Recollections by Randolph H.

The Story of a Common Soldier by Leander Stillwell. War From the Inside by Frederick L Hitchcock. This item is in the category "Books & Magazines\Books". The seller is "cathmw" and is located in this country: US. This item can be shipped to United States.